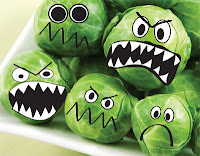 
Incase you haven't heard of Mannekin-Pis, it's statue of a little man doing... exactly what it sounds as if he's doing!

I have only visited Brussels once, but it was quite a memorable visit...  I was 19 at the time and my then-boyfriend and I had travelled there by coach for a long weekend.  There had been some sort of mix-up with over-bookings at the hotel and we (probably because we were the youngest and looked the most gullible) were tranferred to another hotel on arrival.  WELL...  The bed sheets were dirty, the toilet was stained brown and had a filthy ORANGE loo seat that was hanging off.  It was also on the very edge of town.  In my best schoolgirl French (mostly acquired in Avignon - as detailed in yesterday's post!) I told the woman at the desk we would not be staying there because it was "dégoûtant" (disgusting, skanky, revolting - you name it!).  When a representative from the travel company arrived, she bustled us away at top speed and put us in a perfectly acceptable hotel.  I heard her explaining (in French) to the concierge of the new hotel that we had been put in "the hotel the prostitutes use".  (I did wonder if we'd been given the coach driver's room, poor bloke!)  After that, we had a brilliant time and I've always meant to go back.  Here are some pics... Apologies for being useless and not making the photos fit in prettily - I couldn't figure out how to move them apart from left, centre, right!

Before you dash off, any chance you could visit Margo Kelly's blog as she's launching a book drive today for Columbia High School.  Thanks!
Posted by Linda King at 07:00

Beautiful. I do hope to someday visit Belgium. Enjoy!

Oh the chocolate, did you try some from Leonidas? :=)

I'd love to go there someday. Very nice pictures!

I'm glad you were rescued from that hideous hotel. I've never been, but I've had lots of chocolates brought back for me!

Nom for the chocolates, not so much for the sprouts ;)

Also when you ass a picture, if you click the picture itself, it will give you the options to centre it etc, and to add a caption and change the size and that should make the text work around the pictures.

I've only spent a few hours in Belgium, exploring a beach in a sweater, but now really want to go to Brussels. Oh Europe, I love you so.

I've been to Belgium maybe six times - but only ever visited the train station. (Long story!) I'd love to actually see something of it one day!

Your hotel story made me laugh, I'm glad it got sorted for you :-)

Thanks everyone, and thanks Rhi for the photo help!

Are we traveling to a different city every day? What fun? (I had to laugh at your frustration with including photos -- I can't seem to move them around either!)

My husband's father immigrated from Belgium with his parents when he was a child. We've visited many times. Hub loves his Belgian chocolate. (I'm not much for chocolate or sweets in general.) If you put your mouse near the picture's right corner and click on the asterisk that then shows, you can then choose from (and click) the option you want.

Oops, forgot. I sometimes had a problem with the second picture showing up at the top or not where I wanted it. I found that, for the next picture, if I clicked to the far left (after spacing down), when I selected an image, it would follow the picture above it.