Looe - truly my favourite, favourite, favourite place on earth.  I've lost count of how many times I've been there over the years, but the first time was a holiday my husband and I took when my son was nearly two (he is now nearly 20!)  Our son was asleep when we arrived and was shocked to find himself in a strange room when he woke up.  For the first half hour or so, he just kept whimpering "Hone (home).  Car," and sobbing softly.  So cute.  He loves it just as much as we do, now!

Looe is on the south east coast of Cornwall, not very far from the Devon border.  It's a charming fishing port which is now a holiday resort, split in half by the Looe River into East Looe and West Looe.  In the daytime, during holiday season, little motor-boat ferries take you from one side of the town to the other.  At low tide, or in low season, you have to walk across the Victorian bridge (below).
Looe has managed to retain a lot of its olde-worlde charm, with winding streets of ancient stone cottages, restaurants and pubs, some built using timbers salvaged from ships sunk during the attacks of the Spanish Armada (1588).  There's so much I could write about Looe, but I know these posts are supposed to be fairly short!  As a family, we have had many of our happiest times in Looe and if too many years go by between visits I get withdrawal symptoms that actually hurt and have also been known to shed a tear looking at photos.  My husband and I dream of living there eventually, but who knows?
I wanted to add some of my own photos, but the scanner won't play ball and I haven't got any on my laptop, so here are some photos from the internet! 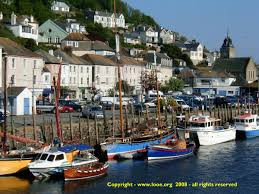 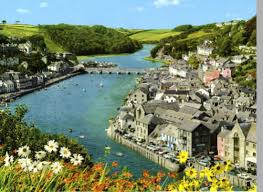 Where is your special place?

So back to Europe :) love Cornwall!

Wow, it looks cool there. I bet your photos are a lot better. I like the old stone bridges and homes.

My favorite place? Tough one. I have traveled in over 30 countries now and I am still moving around. In the end, the best place is where I hang my proverbial hat at the time.

I never went there while living in the UK. It is pretty.

Love your posts, and your home is a happy one for sure!

Glynis - thanks for visiting and for the kind comments!
Jeremy - you don't wear a real hat then? Nice to meet you!
Claudia - thanks for stopping by again today! :-)

Yes. Yes, Yes. Yes. Love Looe. I hope I don't make you jealous by saying it's a half-hour drive from me.

Favourite recent Looe memory - a music festival last September, watching Roy Wood on stage, right on the beach, singing I Wish It Could Be Christmas Everyday!