Les Jardins du Luxembourg, or the Luxemburg Gardens, are in central Paris,

close to the Sorbonne university.  The 17th Century palace and grounds were originally owned by the Duke of Luxemburg, hence the name, and are now one of Paris' most popular public parks.  I haven't been there (boo hoo), but, I was introduced to their existence by my old French teacher, the lovely Madame Simone Goodwin, who is a Parisienne.  They stuck in my mind for a reason: one of our class assignments (back when I was about 15) was to write a story in French and I decided to write about a little boy from a rich home who had no friends to play with ('Le garçon sans amis' - 'The boy with no friends').  I recently found the 'book' while I was clearing out the debris from under our bed (the less said about that the better) and was fairly appalled at the childishly illustrated cover.  I'd like to think I could do better now, but in reality...  Anyway, Madame Goodwin told me about Les Jardins du Luxembourg because in the story my little boy had to get lost in a park.  Having also read glowing reports about the gardens in magazines on various occasions, it's somewhere I've always meant to investigate.  The gardens were originally based on an Italian design as the park was commissioned by Marie de' Medici, but were restored in the 19th Century in a more French style.  Think 55 acres of grounds laid out geometrically with a boating pond, statues galore, fountains, a vintage merry-go-round and pony rides - I'm sure it was a wonderful place for my poor garçon sans amis to get lost in!  Ah well, next time I'm in Paris...

Here are some pics to make you go Ooh là là! 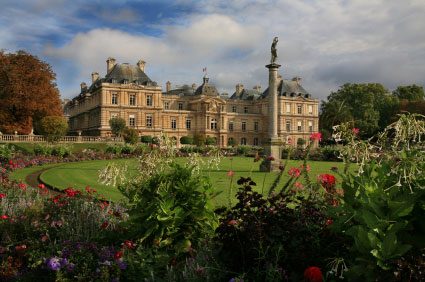 This is a wonderful advertisement - you should receive commission.

Paris is my favorite European capital ever! We go there each year!

i love your theme as I enjoy learning about new places. I also adore those pictures!
Nutschell
www.thewritingnut.com
Dropping by from the A-Z!

Such a beautiful building.

Rode a bike across it. I'm trying to visit all the A-Z Challenge Blogs this month.